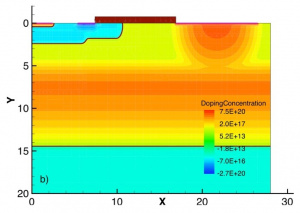 Modeling and simulation of impact ionization in semiconductors is fundamental to the design and the robustness of electronic devices.

Among the available models, the most accepted are the Chynoweth’s law, the Van Overstraeten and De Man model, and the New Bologna Model, which provide analytical expressions for the impact ionization coefficients of electron and holes αe(E) and αh(E), respectively.

Experimentally, the impact ionization coefficients are mainly measured based on the charge multiplication factor inferred from the reverse current of PN-junctions reverse-biased at a voltage quite close to the breakdown. However, this approach is not very accurate, because, in real devices, the breakdown first occurs at small isolated spots or lines (e.g. because of three-dimensional effects), where the local current density may achieve very high levels without reaching the current threshold, which can be detected by the usual instrumentation.

The scope of this work is to validate the main existing impact ionization models (in particular the New Bologna model), which are used in the major TCAD simulation tools.

The experimental approach for this work makes use of a single alpha particle emitted from an almost monoenergetic, collimated radioactive source to generate a very localized burst of electron-hole pairs in the close vicinity of the P+N––junction of a power diode, biased at a given reverse voltage. A dedicated high-gain amplifying chain is used to collect the charge pulse (with duration in the nanosecond range) that arises at the terminals of the device as the initial charge burst drifted along the depleted layer. The probability distribution of the collected charge is built by cumulating typically 20000 independent events. Then, the probability distribution of the multiplication factor is obtained by statistical processing the acquired data. 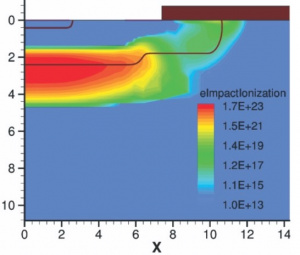 • EE students or in experimental physics