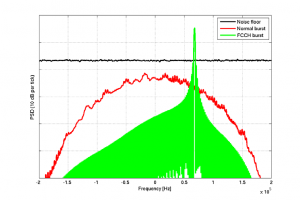 In EC-GSM-IoT the signal level lies far below the noise floor.

By the end of the decade billions so called Internet of Things (IoT) devices will be connected to the Internet. IoT nodes can range from electrical energy meters to tiny positioning nodes connected to a network. Recent advancements in the 3GPP standardization organization address the growing need for IoT modems. The Extended Coverage GSM for IoT (EC-GSM-IoT) standard with 20 dB coverage increase and low-power features got finalized during 2016 [1]. Current research at the institute produced a first prototype of an EC-GSM-IoT modem as an extension to the stoneEDGE project. However, as the 20 dB coverage increase come with the challenge of performing signal processing tasks below the thermal noise floor, there are a few open points to be considered.

In this project, sub noise floor channel estimation for EC-GSM-IoT shall be studied. A Matlab framework will be used to evaluate various algorithmic approaches. The chosen algorithmic candidate can then be implemented in HDL and incorporated into the stoneEDGE project, which already includes signal conditioning, equalization, and channel decoding. The result can then be tested on a Kintex FPGA board with a PULP CPU in conjunction with an evalEDGE FMC module as analog front-end. ASIC synthesis is also an option. This project is a perfect opportunity to solve a clearly defined algorithmic problem and actually test the result in a complete system with real world data.