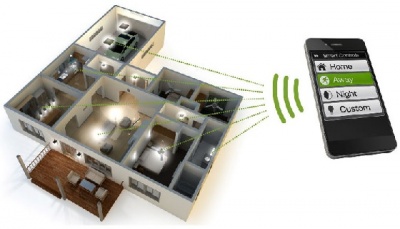 The rapid progress of wireless communications and embedded technologies has made wireless sensor and actuator networks (WSANs) possible. These networks are distributed system consisting of nodes with sensors, intelligence and actuator interconnected by wireless links. Using sensed data the nodes use actuators to perform actions accordingly with smart control algorithms. The possible applications of wireless sensor network include smart living space, localization, environmental monitoring, smart building, etc. Recently, WSANs have been applied to energy conservation applications such as light control especially coupled with LED lights. The decision of lighting control can be made based on the light intensity and human presence in the monitored area sensed by light sensors and motion sensors. This approach can significantly reduce the power consumption and extend the lifetime of the LED lights keeping the same conform. Moreover the smart lighting application can be controlled directly from the user with a smart phone or other device.

The main objective of this project is work in hardware and software to design a wireless sensor network to control the dimming of a industrial LED. The candidate will work with a MSP430 microcontroller from Texas Instruments with a Radio transceiver (or similar System on Chip as CC2530) at firmware level to build up the network and the control algorithm. The hardware part can include also a redesign and optimization of the nodes' boards to build an ad-hoc solution with a small form factor and with only the needed components. The human interface application on Smartphone or PCs which is needed to interact with the network and store the information can be part of the thesis according with the skills of the candidate students . Measurements of the system will be performed from the students in order to evaluate power consumption reduction, reliability, functionality and optimize the system.