Approximate Matrix Multiplication based Hardware Accelerator to achieve the next 10x in Energy Efficiency: Training Strategy And Algorithmic optimizations 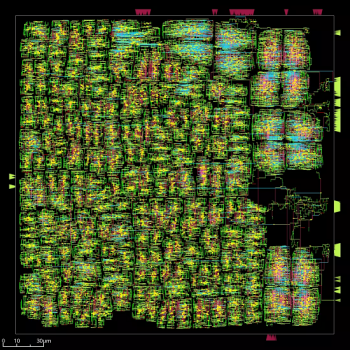 The continued growth in DNN model parameter count, application domains, and general adoption led to an explosion of the needed computing power and energy. Especially the energy needs have become large enough to be economically unviable or extremely difficult to cool down. That led to a push for more energy-efficient solutions. Energy-efficient accelerator solutions have a long tradition in IIS, with many proven accelerators published in the past. Standard accelerator architectures try to increase throughput via higher memory bandwidth, improved memory hierarchy, or reduced precision (FP16, INT8, INT4). The approach of the accelerator used in the project is a different one. It uses an approximate matrix multiplication (AMM) algorithm called MADDness, which replaces the matrix multiplication with a lookup into a look-up-table (LUT) and an addition. That can significantly reduce the overall computing and energy needs.

The MADDness algorithm is split into two parts. First, we have an encoding part, which translates the input matrix A into the addresses of the LUT. After the translation follows a decoding part that adds the corresponding LUT values together to calculate the approximate output of the matrix multiplication. MADDness is then integrated into deep neural networks. The most commonly seen layers in DNNs are convolutional layers and linear layers, MADDness can replace both. Thoroughly tested drop-in PyTorch layers have already been developed and used. However, currently, only a single-layer replacement analysis has been done rigorously. So far, the layers have only been replaced with the MADDness algorithm, and the network has not been retrained with the corresponding new outputs of the layers. Energy estimates with the current implementation using GF 22nm FDX technology suggest an energy efficiency of up to 32 TMACs/W compared to a state-of-the-art datacenter NVIDIA A100 (TSMC 7nm FinFET) at around 0.7 TMACs/W (FP16). In this project, we would like to investigate if we can improve our accelerator’s accuracy by implementing a retraining strategy and framework. The goal would be to replace multiple layers of a DNN without a significant drop in accuracy. A new realm of possible interlayer optimization can then be analyzed afterward. For example: Only calculating the needed dimensions for the next MADDness layer or including the activation layer into the MADDness algorithm. More information can be found here:

1. Acquire background knowledge & familiarize yourself with the project (3 weeks)

3. Set up and evaluate a first retraining pipeline (8 weeks)

If you want to work on this project but think you do not match some of the required skills, please contact us, and we can provide preliminary exercises to help you fill in the gap.