Difference between revisions of "Open Source Basestation for Evolved EDGE" 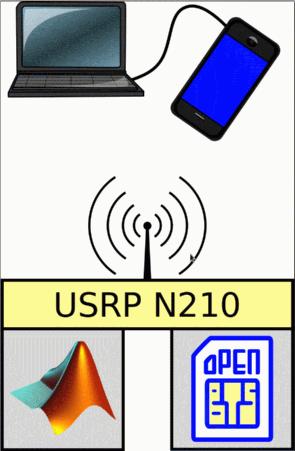 Evolved EDGE is the latest GSM/EDGE standard extension providing downlink data rates up to 1~Mbit/s. It is foreseen as an attractive low-cost alternative to 3G or 4G networks since it builds on existing 2G infrastructure. The increased throughput is based on various features. One of them is incremental redundancy (IR) where, instead of retransmitting a corrupted packet, additional redundancy information is sent and combined in the receiver. At the IIS, an Evolved EDGE physical layer has been implemented on an FPGA-based testbed. However, the IR functionality can only be tested with an Evolved EDGE capable basestation which retransmits corrupted packets based on feedback of the mobile station.

The goal of this project is to develop a rudimentary basestation for Evolved EDGE, capable of encoding, modulating and transmitting bursts in real-time. As a first step, Matlab will be used to generate the bursts and to transmit them via a software defined radio board (USRP N210 from Ettus Research). In a second step, the open source basestation software OpenBTS, which supports only GSM, will be adapted to include also some Evolved EDGE features