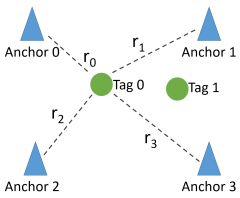 Ultra-wideband (UWB) is one of the most promising and adopted ranging (i.e., distance measuring) technologies used for positioning and localization, as it enables centimeter-precision distance estimation and data transmission. In our applications, we use UWB with the time-of-arrival (ToA) technique, which determines the distance between two UWB nodes based on the travel time of a radio signal from the transmitter to the receiver. Due to its high-precision ranging, UWB enables range-based localization. The figure in right illustrates the classical UWB localization scenario, where a tag (or more) receives distance (range) measurements from fixed nodes with known positions, called anchors. Knowing the positions of the anchors and the values of the distances to each anchor, the tag can determine its own position. However, in the classical UWB ranging scheme, only two UWB nodes can perform ranging (i.e., distance measurement) at one time: in this example, one anchor with one node. Therefore, in this localization scenario, Tag 0 performs ranging with each anchor, and only then Tag 1 starts ranging with the anchors. The drawback of this scheme is that it can not accommodate a very large number of tags, otherwise the rate of receiving measurements for each individual tag would significantly decrease. To mitigate this issue, this project tackles the concurrent ranging problem, where more UWB nodes can perform ranging at the same time and advanced signal processing and learning algorithms separate the messages of each sender from the received signal.

UWB Two-way Ranging (TWR). Figure 2a illustrates the classical single-sided two-way ranging (SS-TWR), the simplest scheme, where an Initiator requests a ranging measurement by sending a poll message; the responder answers after a fixed delay TRESP with a response message containing the timestamps marking the receipt of the poll message. The Initiator receives the message and, having the timestamps, it computes the time of flight τ and estimates the distance from the responder as d = τ × c, where c is the speed of light. Two-way ranging, as the name suggests, involves a sequential pairwise exchange between the Initiator and every Responder. Thus, if an Initiator has to estimate its distance from N nodes, N cycles of ranging are required and therefore 2 × N messages.

UWB Concurrent Ranging. The project aims at developing a novel approach to ranging in which, instead of separating the pairwise exchanges necessary to ranging, these are overlapping in time (Figure 2b). Its mechanics are extremely simple: when the single (broadcast) poll sent by the initiator is received, each responder sends back its response as if it were alone, effectively yielding concurrent replies to the initiator. This concurrent ranging technique enables the initiator to range with N nodes at once by using only 2 packets, i.e., as if it were ranging against a single responder. This significantly reduces latency and energy consumption, increasing scalability and battery lifetime, but causes the concurrent signals from different responders to “fuse” in the communication channel, potentially yielding a collision at the initiator.