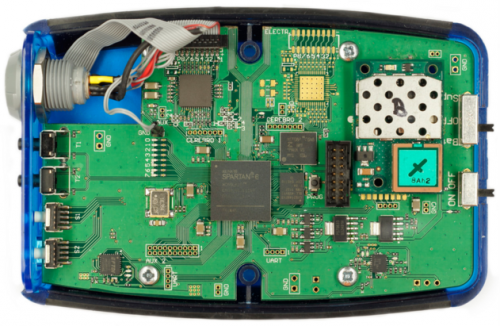 Battery powered medical signal acquisition platform based on the ‘Cerebro v2’ ASIC, a FPGA for signal processing and a commercial Bluetooth module by which the acquired data is transmitted to a computer.

A battery-powered medical signal acquisition device, which is suited for ECG or EEG measurements, is developed in this project. The device is based on the ASIC ‘Cerebro v2’, designed at IIS. A Xilinx Spartan-6 FPGA is used for controlling and further digital signal processing, while a commercial Bluetooth module provides a wireless link, e.g., to a PC or tablet running a visualization or data capture software.

Although the wireless and battery-powered nature of this system reduces the impact of mains interference, its amplitude might nonetheless be in the same order of magnitude as the signal itself for poor electrode contacts. Such are typically given when comfortable-to-wear dry electrodes are used. A 50 Hz noise estimation algorithm Hz implemented on the FPGA allows to remove the interference without distorting the biomedical signals of interest.

The device is powered by an off-the-shelf mobile phone battery which is sufficient to run the system for several hours - the battery life-time is mainly limited by the Bluetooth module. The battery can be recharged over the USB interface which also offers an alternative connection for debug and reconfiguration purposes.